If you are interested in hiring the Memorial Hall for a party, function, meeting etc please contact Angela Forward on 01634 251756. 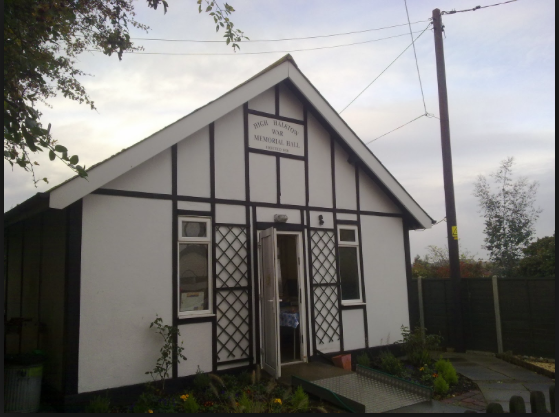 The Memorial Hall volunteers organised a Pancake Race for the toddlers of the village.

Please click on this link to view the race.

Most Memorial Halls are erected to remember those who have died, but High Halstow was fortunate to have most of the men return safely, from World War 1. Therefore it was decided to build a Hall to acknowledge this, which makes this hall rather special.

The people of the village wasted no time so in 1919 plans were made. First they had to obtain the land, and Mr Bill Osenton (known to his friends as Buckhole Billy as he owned Buckhole farm) kindly gave the ground to the village, and Mr Arnold of Arnold Day and Tuff gave his services free.

In February 1920 the Hall was opened, with a party and a glass or two of ale, and on 26 April 1920 the first committee meeting was held.  The committee consisted of Mrs G Snowden, Miss M Harryman Mrs J Hogben, Mr W Baskin, Mr A Osenton, Mr S Osenton, Mr J Maylem and Mr A Drayton.

Trustees Messrs W.J. Osenton, B. Osenton and D.Harryman drew up rules for guidance and information of the committee, these were accepted and agreed by the committee.

Extract from the rules
Rule 1 – The Annual subscription shall be 2/6 for those over 17 years of age and 1/6 for those under that age.
Rule 4 – It will be considered a breach of the rules for members or their friends to spit or drop lighted cigarette ends on the floor.

On September 6th 1920, The committee decided to have 4 concerts to remove the remaining debt of £63 that was incurred when building the hall. Charges for admission to be 2/- (2 shillings) 1/- (1 shilling) and 9p (9 old pennies), with persons under 14 half price. There would also be a “draw” and the following sundries were donated Gent’s bicycle, a pig, a bag of potatoes, a sack of coke (coal), several fowls, rabbits, and goods to the value of several pounds. This almost cleared the debt to the Hall. The balance sheet was signed by the Rev Longfield, who audited the books.

The first year concluded with their AGM and election of new officers, it was decided there would be 3 ladies and 6 gentlemen forming the committee. Thanks were given to Mr & Mrs Topley for conducting the Dancing classes, and to the Pianists Mrs Ingleton, Mrs B Osenton and Mrs Hogben , to Mr Hogben for supplying the coke for the winter and to Mr A Osenton for providing the stoves and outbuildings (toilets).

On November 96h 1923 it was decided that an extra room be built behind the existing Hall, and that it should be large enough to hold a billiard table, and that it should be in memory of Mr Ingleton and Mr Alfred Osenton, who had both done so much for the young men of the village when they were alive. By December 1923 plans had been drawn up and it was agreed that the new room would be build during the coming year.

The new room was officially opened on 7 January 1925. With Mrs Harrison performing the opening ceremony.

In October 1929 a letter was received from the football club asking if they could use the back room as a dressing room and this was agreed.  They have used this facility ever since.

In July 1935 a decision to purchase a clock for the main Hall was passed at committee. Also it was suggested that electricity should be laid to the hall, and after much discussion Messrs Cable and Hortons estimate was accepted.

The roof of the back room was recovered during November 1953 as it was leaking badly. (this has lasted until now and is to be completely renewed in April 2004). May Holmes was elected onto the Hall committee on 20 July 1967, and remained on the committee until shortly before she died.

During 1962 the affect of the new Recreation Hall was having a very bad effect on the Memorial Hall, bookings had dropped and income was low, and the committee had to use up most of their reserves, but a directive from the Charities Commission instructed the Memorial Hall to “carry on the work for which it was intended”, by reasons of the activities for which the hall was used, the Memorial Hall was able to enjoy full rating relief under section 8 of the Rating and Valuation Act”. Within a year things had improved, and bookings were being made and the cash balance had risen from £8 to £21.17s.and the hall was flourishing again.

So now we come to 1997 when sadly May Holmes died, May had for many years been secretary and treasurer of the Memorial Hall. Vic and Jackie Godding, took on the task, but in May 2000 decided to give it up. So now, we have the Hall under new management, an AGM held on 6 June 2000 requesting a representative from all the clubs who use the hall to attend and a new committee was formed. Since that day, funds have been raised by various activities, and the hall has been improved in many ways, but always keeping the style of the original Hall.

The Memorial board, with all the names of the men who returned has pride of place; photographs of those men surround it, which makes it easy to put a face to a name.