PARISH COUNCIL MEETINGS ARE HELD ON THE SECOND WEDNESDAY OF EVERY MONTH.

PUBLIC ARE WELCOME TO ATTEND

The parish of High Halstow lies on the north side of the Hoo Peninsula.  Its southern half is upland, straddling the ridge of higher ground that forms the peninsula's spine and reaching a peak at Northward Hill.  From here the ground drops away to reclaimed marshland, and a river frontage on the Thames.  Flanked by St Mary Hoo to the east and Cooling to the west, the central area encompasses both the main settlement and a woodland nature reserve.

Until the mid 20th century it was a modestly sized community, similar in character to neighbouring villages, but thereafter it has experienced considerable growth.

The village remained small until after the Second World War, comprising the church, a school, two shops, a pub, a wheelwright's shop, and an undertaker's, with the village being served by a single policeman. Eventually some of the older houses were demolished and replaced. Churchill Place was developed and in the area behind the church, formerly known as the Square, several modern bungalows replaced five thatched cottages. From 1952 more homes were built in the village to house Isle of Grain oil refinery employees.

Read the latest information on the CoronaVirus outbreak & what help is available in the village. 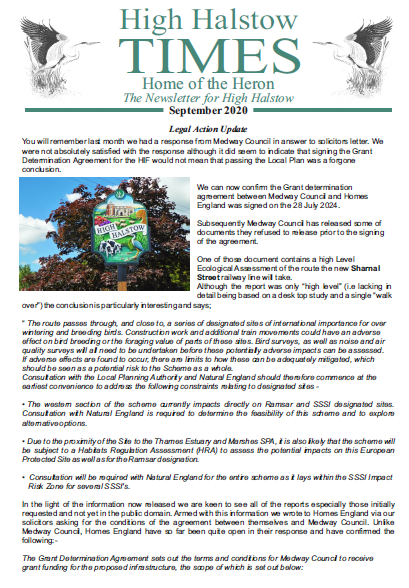 The September edition of the High Halstow Times