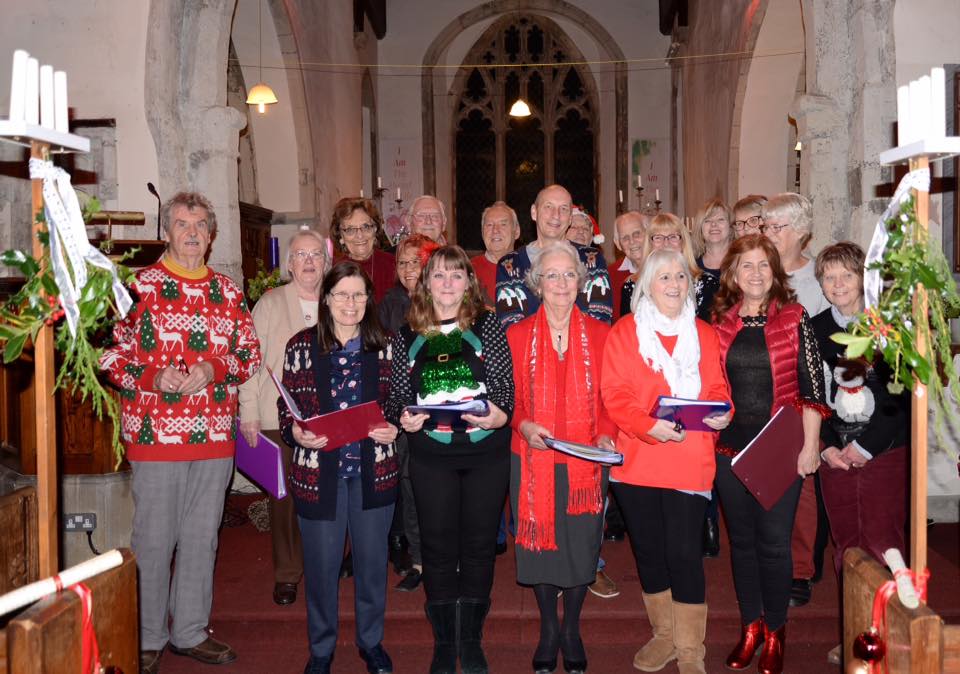 For further information please contact Maggie Ryan on margaretryan3m@gmail.com or Linda Atkinson on 07825 619 353.

At the end of 2016, a group of singers were needed for some community events and Ken Reynolds and Maggie Ryan, both of whom have long been associated with local choirs, got together with a group of enthusiastic villagers who were very keen to sing and help the community. There were no auditions – just a love of music!

Before long there were many of us having a very enjoyable time, making new friends and learning new musical skills that surprised us all! Ken Reynolds inspirationally leads the group and we started with singing carols for the Christmas Tree Festival which was a great success and helped to raise money for the ‘Friends of St Margaret’s Church’. Everyone was keen to go carol singing as a traditional village Christmas gift to our village. This was very popular, many joined us to sing and the villagers supported us very well. Many people – particularly villagers who had recently moved to live here from big towns, were enchanted to see that these traditions are still alive and well. The carol singing ended brilliantly at Rupert and Sally’s house with mulled wine and mince pies which were most gratefully received! Donations from the carol singing raised £120 for Demelza – a charity close to the heart of those we met along the way.

The singers who had originally just got together for the Christmas events, then wanted to continue as a choir after Christmas, so we got together again for our first practice on Monday 16th January and songs from the musicals proved to be very popular! We are very grateful for the support we have received from Stephen our vicar and the Friends of St Margaret’s.

The High Halstow Community Singers will meet fortnightly on a Monday evening in St Margaret’s Church from 8.00 pm until 9.00 pm.

All are welcome – do come and join us to sing!