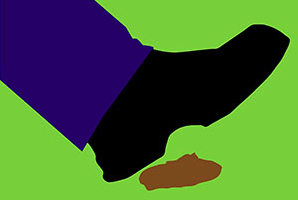 Dog mess is an eyesore and a health hazard.  If you are a dog owner, you have a legal duty to clean up every time your dog messes in a public place.  Registered blind people are not required to clean up after their guide dogs.  There is also exemption for dog owners on some kinds of public land in England and Wales, including:

Land used for agriculture or woodlands

Most local councils require dog owners to carry a poop scoop and disposable bag whenever they take their dogs out to a public place. Some councils offer free scoops: ask your council’s animal warden unit.

Look out for bins marked as dog bins to dispose of your dog bag.  If you cannot find a dog bin, then double wrap the dog bag and place it in a normal litter bin.

If your street is littered with dog mess, you can ask your Medway Council to clean it.

In England and Wales, local authorities can introduce public spaces protection orders, making it an offence not to clean up dog mess in certain areas. Under those orders, a person who doesn’t clean up after their dog may face an on-the-spot fine of up to £80.  These fines are known as fixed penalty notices.  If a person refuses to pay they can be taken to the local Magistrates Court for the dog fouling offence and fined up to £1,000.

The system of controlling dog fouling under public spaces protection orders was introduced by the Anti-Social Behaviour, Crime and Policing Act 2014.  It replaces the old system of dog control orders under the Clean Neighbourhoods and Environment Act 2005.

In Scotland, The Dog Fouling (Scotland) Act 2003 makes it an offence for a person in charge of a dog in a public open space, including communal areas but not including agricultural land, not to clear up after the dog has defecated.  The maximum fine for the offence is currently £500.